Afghanistan: The Bear Trap tells the story of how the Mujahideen through carefully conducted guerilla warfare brought the Soviet bear to its knees in the period from 1983-1987. Their success relied on resources and support from Pakistani Inter-Services Intelligence (ISI) and the United States Central Intelligence Agency (CIA). 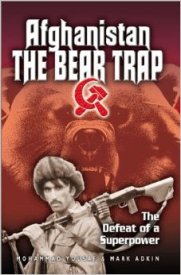 With great detail, former Director of the Afghan bureau of ISI, Brigadier Mohammad Yousaf and author Mark Adkin, describe how various tactics of attacks on supply lines, bridges, pipelines, and airfields together made up the strategy of death by a thousand cuts. Furthermore, the book provides plausible insights into why the Mujahideen, despite their great success, were denied governmental power in the immediate aftermath of the failed Soviet invasion. The book is written for students of irregular warfare, and it describes with great tactical detail how foreign intelligence services can intervene secretly in wars and project their power in a combined effort to turn the tables.

Setting the stage and outlining the actors

There were many actors involved in Afghanistan’s struggle against the Soviet Union. At times, their interests could be aligned in a collaborative effort for mutual benefit. But, as was to be revealed, only one would come out the victor. By Yousaf and Adkin’s account, the motivation for the United States to supply the Mujahideen with weapons and explosives on a large scale was driven by lust for revenge for their devastating experience in Vietnam. Afghanistan was their opportunity to settle the score with the Soviet Union.

When the Soviet Union invaded Afghanistan in support of the domestic communist cabinet, Pakistan felt its very existence being threatened by the prospect of being crushed by the Soviet Union to the West and India to the South. To Pakistan, the resistance in Afghanistan was thus a covert forward defense against Soviet aggression. The seven tribal Mujahideen commanders in Afghanistan struggled with severe internal rivalries and feuding, but despite this they could all cooperate in the end because of the Jihad – a crusade against unbelievers – against a foreign aggressor to save their faith, defend their honor and protect their way of life.

They would do this through a strategy of death by a thousand cuts, and the accounts of the tactical operations in the book are numerous. What the operations all have in common is that they consistently sought to exploit their adversary’s weaknesses. They did so through operations planned carefully and in great advance as their opponent’s chain of command and possibilities of efficient management were very limited. The book explains that, surprisingly, it was generally easier to make the Mujahideen conduct paramilitary operations than sabotage operations due to code of conduct. This was an interesting characteristic of the war and also the explanation for why paramilitary plots were the predominant means of resistance.

The intermediate option as endgame

One would think that the Mujahideen, being the victors of the war, would then seize control of Kabul and government in a matter of time. However, this was not to be the case, as the United States downgraded and stopped its supplies to the Mujahideen to hinder its ultimate victory. The CIA was starting to grasp that having a fundamentalist Islamic government replace the communist cabinet would be undesirable. In this choice between two evils, the United States went for the middle ground; to leave Afghanistan in a civil conflict that neither side for the time being would have the necessary strength to come out on top of. The United States were to be the only winner of the war in Afghanistan.

A playbook for subversion

The greatest contribution of this book to our understanding of irregular warfare is its very explicit account of the planning and conduction of the various tactics. It not only describes the ideas behind the operations, but also demonstrates how to transform theory into practice. There are numerous examples of this throughout the book, along with maps and figures allowing the reader to play along as the Mujahideen lure the Soviet bear into their trap.

Moreover, the book also explains the vital structural features that surrounded the operations and thus illustrates which underlying conditions the success of paramilitary resistance relies upon: First, loyal people who will support the effort at great risk to themselves. Second, the need for the guerilla to believe in his cause. Third, favorable terrain. Fourth, a safe haven. Fifth, outside backers who support their cause politically and economically. In Afghanistan, the paramilitary resistance of the Mujahideen could check all of these boxes.

A matter of perspective

Yousaf and Adkin’s work is in many ways comparable to Gregory Feifer’s The Great Gamble and the Russian General Staff’s The Soviet-Afghan War: How a Superpower Fought and Lost, both of which deal with the Soviet invasion of Afghanistan. Feifer tells the same story as Yousaf and Adkin, but from the point of view of the Soviet Union. Where The Bear Trap tells about everything the Mujahideen got right, Feifer tells the story of everything the Soviets got wrong.

In The Soviet-Afghan War: How a Superpower Fought and Lost, the Russian General Staff provides more of a historic backdrop to the failed invasion, underlying how the Russian leadership since Karl Marx considered history to be a science, yet, because the Soviet Union saw itself as the champion of wars of national liberation throughout the world, one type of military operation most Soviet officers had never contemplated was one in which the Soviet Army would be called upon to suppress a popular insurgency. Interestingly, in contrast to both The Bear Trap and The Great Gamble, the Russian General Staff contributes the failure more to a lack of training in counterinsurgency than to a lack of purpose and morale.

I would highly recommend this book to students of irregular warfare. It describes in detail how foreign intelligence services can covertly intervene in wars and turn the tides. It is very strong on tactics; one could argue maybe even too strong. I wonder if this to some extend blinded the author to the strategic level, where I found the concluding remarks a bit naïve. If more emphasis had been put on the strategic level of the CIA’s role instead of the tactical, it should not be a great surprise that they changed their attitude towards the endgame.

Together with Yousaf and Adkin’s lack of strategic perspective, another important perspective is revealed. Since it is not written from an American point of view, there are some interesting insights into how the CIA’s partners in Pakistan and Afghanistan thought of their vengeful donor. Interestingly, some of these aspects are still in play, as the United States along with its allies continue to struggle in Afghanistan to this day.